Return to the Stars is an optimistic Science Fiction roleplaying game designed to make it easy to tell stories of exploration and adventure in an optimistic space opera setting. You may have been waiting for hopeful science fiction.

Well, the wait is over, we launched the Kickstarter for Return to the Stars this morning.

People like it—we are already at 220% of our funding goal. 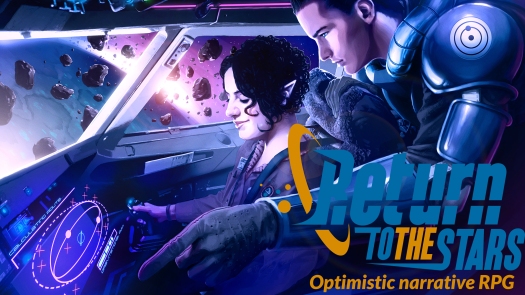 I’m really excited about putting a hopeful game out at the present moment.

And people seem to be excited to back a game where they can play as a new generation of geeks — makers, cosplayers, scientists, and pop culture enthusiasts setting out on an adventure of exploration and discovery, reconnecting the lost worlds of humanity.

If you’ve already had a chance to play the quickstart edition, we’ve added some fun new subsystems that you can enjoy: character arcs, competitions, downtime tinkering, props, and a large selection of space opera skills and stunts so you can create your own amazing characters.

Backers at any level, even $1 also get a remarkable essay on the new hopepunk genre by Alexandra Rowland whose debut novel is coming from Scribner’s next month, as well as a brand-new adventure in an updated quickstart guide.

The full game is discounted to only $15, for Kickstarter backers.

Paint a better future in bold primary colors! Get your copy of Return to the Stars!