RuneQuest was one of the important early RPGs that ensured roleplaying would be a hobby, not a singular game system. RuneQuest combined Steve Perrin’s innovation in game mechanics with Greg Stafford’s remarkable world of Glorantha, which deepened heroic fantasy with serious attention to a broad variety of world cultures and which took mythology seriously. Its lore is vast and deep, but approachable. In the mid-eighties, the rights to game were sold to Avalon Hill and the setting was divorced from the game, albeit with a few notable RuneQuest Glorantha titles appearing during a brief Renaissance under the stewardship of Ken Rolston.

RuneQuest’s skill-based progression was an important break from D&D Level and Class mechanics, and the combat was more detailed, deadly, swingy and simulative. As the “basic roleplaying system” it was the ancestor of many RPGs, most notably Call of Cthulhu. Glorantha is currently supported be a narrative game system called HeroQuest, and a recently released supplement for the D20 system 13th Age.

And now a third RPG supports the setting: the new RuneQuest Roleplaying in Glorantha. RQ and the setting that made it famous have been reunited.

The game is clearly a passion project. The artwork is astonishing, it is both well executed and it is clear that a massive effort was invested in providing art direction to capture the unique aesthetic of a myth infused bronze age setting. The graphic design is as good as you’ll find in any high-end RPG—it leans in with ornamental detail while always being legible and organizing information in and clear sensible ways. It is easy to read in PDF form on tablet, but don’t expect to have a fun time consulting it on a smartphone. 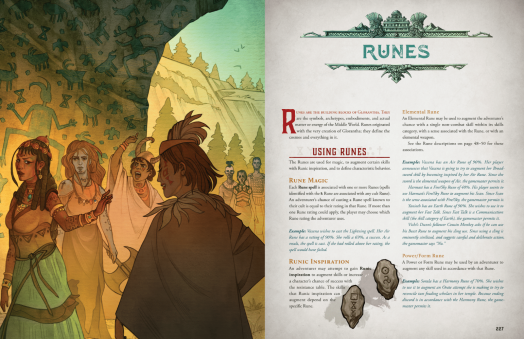 RuneQuest was always a skill-based RPG with a very large number of options, only a handful of which a starting player would even modestly competent in. Traditionally, this meant a lot of stumbling around trying to move the story forward while people fell off their mounts, failed to notice things essential to the plot, and were often barely capable of communicating with others. Fortunately, there are new rules that allow one to augment one’s skills often with a passion or magical runic affiliation, or potentially with another skill. This should do a lot improve the competence of characters from the very beginning of play. While new RQ hasn’t learned much of anything from the past decade of game design advances when it comes to failing forward, failing less will improve the early game significantly.

The passions and runes I mentioned are new to this RuneQuest—building in systems that tie the character in a mechanical way to things that have always been in the setting. Glorantha is integrated across the rules, there is nothing “generic” about them. This is particularly true in character creation, which begins by developing the backstory of your parents and grandparents, and how their lives were affected by the history that shaped their society.

Unfortunately, the new RuneQuest botches character creation in a fundamental and almost fatal way. Characteristics like strength and charisma are simply rolled randomly on (3D6 for 5 characteristics, and 2D6+6 for two others.) If characteristics really didn’t matter, this would simply be an arbitrary old school affectation. But they dramatically impact a character’s survivability, effectiveness and progression, and gatekeep what roles a character can play in the game. That RPGs needed alternatives to purely random chance needed was recognized in the hobby as early as AD&D and in RuneQuest with it’s third edition in the mid 80’s.

It is clear, furthermore, that the designers know that the system they have provided for character generation is garbage. They include 7 premade characters in the game—whose characteristics average 17 points higher than you would expect from ones generated randomly. Across all the premade characters there is only one who has who a single stat less than 10—they have a CON of 9. In a folksy way, the designers do note in an aside that “it’s perfectly all right” to discard weak characters or use a different method of creation at the game masters discretion. This is not good enough. The job of a designer is to create systems that work—they don’t delegate that to Gamemasters, or force players to reroll. This needs to be fixed before a print edition is issued of a book that claims it “has all the rules you need to play”.

I am glad to say this appears to be an isolated flaw. Many other systems are remarkably improved: spirit rules are vastly improved increased, fixing what had been a flavorless slow grind. Character get access to useful and fun cult magic from their gods right from the beginning of the game. Sorcery is now grounded in the magical ecology of Glorantha. It does seem much weaker than Divine Magic, at least for starting characters—but I look forward to seeing how it works in practice.

It is possible way sorcery may be more powerful than it seems at first glance—the game is organized around the assumption that adventures occur roughly once per season with “normal life” happening between them. Sorcery is set apart from other magic systems in that it allows the creation of long term effects. It is possible sorcerers may be able to come into adventures somewhat more capable even if they are less flexible and powerful during play.

The passage of time is also reflected in rules for managing a character’s household and holdings. Alongside the rules for passions, loyalties and reputations which ties characters to communities, runic affiliations which connect characters to the ineffable, ties to history in character creation and the existing integration of progression into religious and spiritual practice this is a game that has sets itself about by the number of game systems that tie into the deep world building. It should be exciting to see how this plays out in a campaign.

Finally, I’ll mention some very nice bronze age touches—there are rules for fighting from a chariot or in a phalanx! 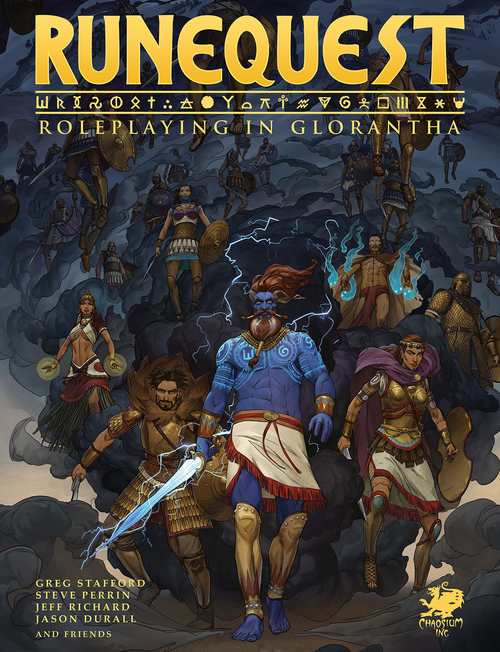 So, should you get the new RuneQuest? Well, if you have fond memories of earlier editions and you care about Glorantha you should buy it now—this is greatly improved edition which integrates Glorantha into the game in a way that we haven’t seen since RQ2.

If you are a student of RPG design, it is well considering—the game doubles down on simulationist play, refining the ideas at it’s core. It is different than many other currently successful games, and true to its idiosyncratic pedigree.

If you are intrigued by legendary world building of  the Glorantha setting it might be worth trying the game. On the other hand HeroQuest would likely a good fit for a more narratively focused gamer, and 13th Age Glorantha is a better off ramp for someone looking to try another game after Dungeons and Dragons.